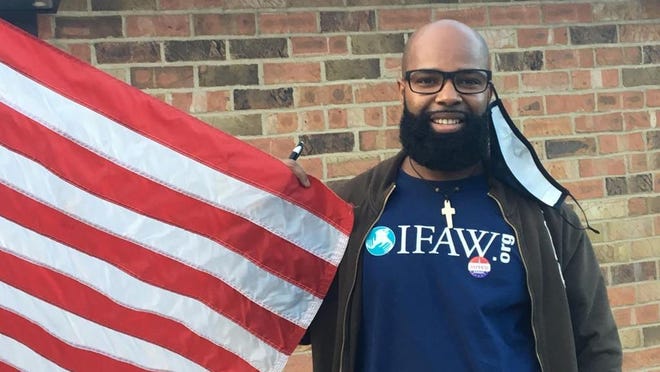 NEW BEDFORD — Not even confusion over the location of his polling place could dampen Adilson Cabral’s excitement on Tuesday.

Cabral, who came to the United States over 18 years ago from Cabo Verde, was voting in his first U.S. election after becoming a naturalized citizen in September.

A little after 3:30 p.m. Cabral, 40, went to the Hayden McFadden Elementary School polling place and enthusiastically greeted every poll worker.

When the workers informed him his polling place was actually less than a mile away at Hillside Court, Cabral simply drove there and greeted the poll workers in the exact same warm manner.

After he exited the poll and proudly placed an “I Voted” sticker on his chest, Cabral said voting felt great.

The truck driver compared not being able to vote in the nearly two decades he’s been in the U.S. to being stuck in the middle of a lake on a boat with an engine that has no gas.

He said he felt left behind.

In this election, Cabral was voting with a specific group of people in mind, the individuals who died from contracting COVID-19 and their families.

“We need a man to support our families,” Cabral said of the role of the president.

Cabral has five kids of his own and after initially coming to the U.S. for school, decided to stay after his first child was born.

“It’s an honor to be in this country, this country is a great country…it’s a country of opportunity,” Cabral said, “But you have to use your head.”

One of the reasons it took Cabral so long to become a citizen, he said, is because police caught him with a bag of marijuana back in 2004 before the drug became legal in Massachusetts and it slowed down his naturalization process.

“I was a knucklehead..you know when you’re young you do a lot of stupid stuff,” Cabral said. Now he credits God for being clean and sober.

With his citizenship Cabral said he feels like he has both feet down in the United States and he’s a part of it.

Cabral was one of many newly naturalized citizens to vote this week.

Helena DaSilva Hughes, executive director of the Immigrants Assistance Center in the city, said newly naturalized citizens vote at a higher rate than citizens born in the country.

Hughes said in many cases the newly naturalized citizens were not able to vote in their home countries and being able to vote, “is very powerful for them…they take it very seriously.”

The Washington Post reported some U.S. Citizenship and Immigration Services (USCIS) officials in Massachusetts mistakenly told new citizens at recent naturalization ceremonies that they were ineligible to vote because the Oct. 24 registration deadline has passed.

In reality, state law allows new citizens to register until 4 p.m. the day before an election if they become citizens after the deadline to register.

Hughes said she personally had naturalized citizens tell her they couldn’t vote in this election and she had to tell them they actually had until Nov. 2 to register.

“There’s been a lot of misinformation and miscommunication coming out of USCIS,” Hughes said.

The pandemic has also created a backlog at USCIS and Hughes said some people were afraid they were not going to become citizens in time to vote.

While Cabral said he wasn’t confused over whether or not he could vote, he was initially nervous he wouldn’t become a citizen in time.

In addition to making sure newly naturalized citizens are registered, Hughes said the Immigrants Assistance Center has been helping them understand the ballot questions and understand how voting works.

“We want to make sure people have those tools,” she said.

Raquel Bourguignon, 49, became a citizen in July of last year and chose to vote by mail.

“To me [voting is] very important,” Bourguignon said, “I know a lot of people from my community, immigrants, they don’t have the same rights…they can’t have their voices heard. So I think it’s a pleasure to vote because this way I can represent my community as an immigrant and as a woman.”

Bourguignon followed her parents to the United States from Brazil in March 2003 because she said she wanted a better life for her and her family and called the naturalization process, “a long journey” and “”not an easy one.”

Goncalves, who was born in Brazil and is now in his first year at Harvard University, voted for his first time on Tuesday up in Boston, according to Bourguignon.

The mother of two, whose second son was born in the United States, said people are seeking change now more than ever.

“If we don’t do anything, nothing is going to change so we have to participate,” Bourguignon said.

Read the article at SouthCoastToday.com