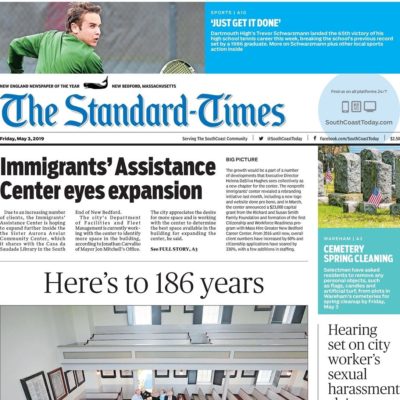 NEW BEDFORD — With an increasing number of clients, the Immigrants’ Assistance Center is hoping to expand inside the building that it shares with the Casa da Saudade Library in the South End. “In order for us to meet the needs, we need to expand,” Executive Director Helena DaSilva Hughes told The Standard-Times. The center has already gone through some changes recently, which DaSilva Hughes said she sees as a new chapter. The nonprofit immigrants’ center revealed a rebranding initiative last month including a new logo and website done pro bono. In March, the center announced a $23,000 capital grant from the Richard and Susan Smith Family Foundation and formation of the first Citizenship and Workforce Readiness program with Mass Hire Greater New Bedford Career Center. DaSilva Hughes said the center is trying to fix up the third floor, but that will take some time and money. It could use a heating system, sprinkler system and plumbing, according to DaSilva Hughes. They’ve been working with the city and WHALE, she said. In the meantime, they’re hoping to use some space on the second floor for case managers. The city’s Department of Facilities and Fleet Management is currently working with the center to identify more space in its current building, the Sister Aurora Avelar Community Center, according to Jonathan Carvalho of Mayor Jon Mitchell’s Office. The city appreciates their desire for more space, he said by email, and is working with the IAC to determine the best space available in the building for expanding. From 2016 until now, overall client numbers have increased by 60% and citizenship applications have soared by 336%, with a few additions in staffing. DaSilva Hughes said aside from what they do at the center, they’re often asked to teach human services agencies and health care provider staff about immigration. DaSilva Hughes has also been talking to families at schools to make sure they are prepared if they get picked up by Immigration and Customs Enforcement

On Saturday, there will be a lemonade stand in front of NETO Insurance, 1470 Pleasant St. in Fall River from 10 a.m. to 2 p.m. and 50% of the proceeds will be donated to The Immigrants’ Assistance Center.

The center hopes to add another Americorp member full time who will be trained on job readiness, English as a second language and citizenship. The Citizenship and Workforce Readiness program will offer new citizens the opportunity to develop job-based computer skills, contribute to the workforce and increase economic mobility. MassHire will provide intake, assessment and computer-based job search training in the classroom on the second floor of the center. This computer lab will also have tablets since U.S. Citizenship and Immigration Services uses them to administer English reading and writing tests during naturalization interviews. Manuel Fernando Neto, a founder of the center and a former city councilor has been trying to bring more awareness to the center through a book he wrote in Portuguese called “Retalhos da minha infância” which translates to “Remnants of My Childhood.” He said he published the book in 2017 in Fall River, but there was a launch event at UMass Dartmouth in March. The university is working on translating the book into English. Neto said he printed about 500 copies, but hasn’t sold any. Instead, he strongly encourages people to donate directly to the IAC. DaSilva Hughes said the center has gotten close to $900 from the book. Neto said he never intended to write a book about his “humble beginnings” in Faial in the Azores where he worked as young as 9 years old and came to the U.S. through the Azorean Refugee Act after eruptions of the Capelinhos Volcano. His daughter Rosemary Neto Hazzard said “He definitely is the epitome of the American Dream.” Now he’s about halfway done with another book in English about his experiences in the U.S. “A place like the center needs to exist to deal with the challenges that you have for the immigration situation,” Neto said. View the article on South Coast Today > https://www.southcoasttoday.com/news/20190502/immigrants-assistance-center-looks-to-expand-space-services